The heart of Europe vs. the world’s second largest city

Could you imagine living in a city with 21.5 million inhabitants? Making the right choice for a business location is always tricky and there are countless factors contributing. There are some aspects however, that clearly speak in favor of the German capital.

In 2019 Berlin and Beijing are celebrating 25 years of their city partnership. As one of the most active city cooperations, it has established a great number of projects in sectors like the judiciary and public security as well as 18 school partnerships. Although the two cities differ enormously in population and area, Berlin also has valuable input to offer in the areas of urban development and economy. Picking up on the anniversary, we are taking the liberty of comparing both cities in terms of their startup ecosystems and some aspects concerning the living and working conditions. 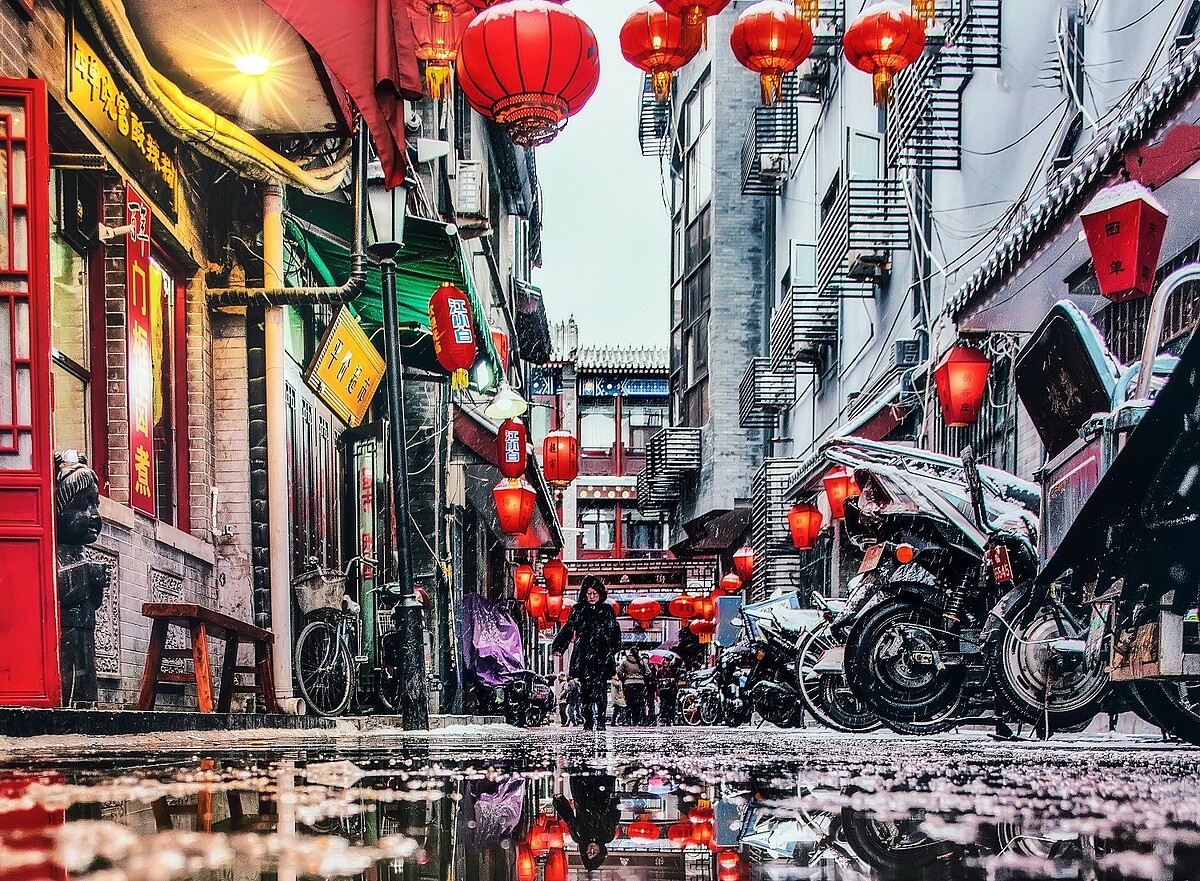 A new report from CB Insights shows just how rapidly Beijing is becoming a global contender. It is stated that “Beijing and Shanghai are poised to be the tech hubs of the future,” Also “they lead among high-growth hubs for unicorns, mega-rounds, and large exits. Company creation is accelerating.” While Berlin has a particularly strong grip on developments in FinTech, IoT as well as Health and Life Sciences, with fundraising cumulating to a total of $72 billion within the past six years, Beijing’s buzzworthy fields are AI, Big Data, Blockchain, and EdTech.

On the flip side according to Fortune, venture capitalists are recently having a more difficult time raising money in Beijing. Beijing seeks to contain financial risks in the world’s second-largest economy, venture capital is said to be drying up, and startups should brace themselves for what some industry insiders describe as a “capital winter”. 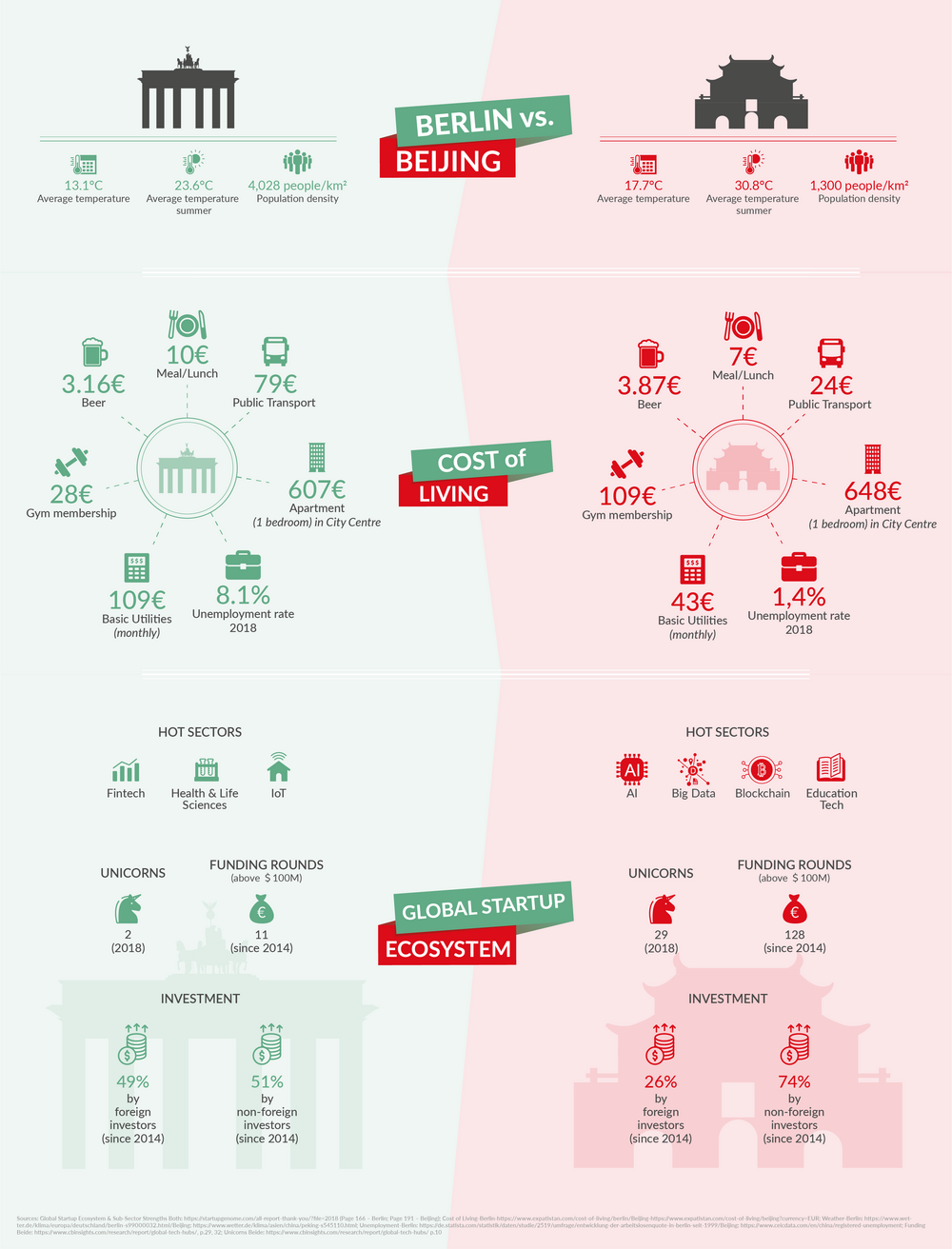 A great sense of community coupled with top international talent and a large concentration of capital makes Berlin the centre of the German startup scene - a top location choice for emerging companies. As the biggest entrepreneurial ecosystem in China, Beijing offers solid research and technical development, bolstered by top universities. With a huge market of 1.3 billion people, and fundraising outpacing Silicon Valley last year, Beijing is emerging as a new tech heavyweight. If you’re looking for an environment that can foster innovation, putting down roots in either city has its advantages.

Berlin is home to 11 % foreign startups, compared to an EU average of around 2%. From tech giants like Google and Facebook to unicorns Auto1 Group and N26, the city is spawning a diverse range of firms within its hot sectors. Berlin-based startups attracted an all-time high of EUR 4.2 billion in venture capital in 2017 and absorbed more than two-thirds of all financing in Germany in 2017 - raising a total of €2.97 billion ($3.65 billion). McKinsey&Company projects that this ecosystem will create 100,000 new jobs for the city by 2020.

If you start a business in Berlin, support from investors comes easily - 51% of whom are locals and initiatives by the Berlin or German government. Since 2014 there were 11 funding rounds exceeding $100 million. Long-term loans are at a reasonable fixed interest rate and there are repayment suspensions for the first 1-2 years.

In Beijing, the combination of market size, speedy consumer adoption, and entrepreneurs’ hunger for scale have created economic firepower matched only by Silicon Valley. The striking point in Beijing is its tech area Zhongguancun, where Weibo, Youku, Microsoft, and other major IT firms are headquartered along with major incubators and accelerators. According to CB Insights, Beijing is ramping up to compete with Silicon Valley funding levels, as they’ve raised more than half as much funding as Silicon Valley between January 2012 and May 2018. With this kind of growth, it’s no wonder they currently boast 29 unicorns. In 2012, Beijing startups raised about 30 first-time funding rounds, a number that grew to more than 250 in 2018. With more than 30 exits valued at over $100 million since 2012, including JD.com's IPO, Beijing is a city to watch.

The atmosphere of Berlin’s open society appeals to people with an entrepreneurial spirit. As one of the fastest-growing startup hubs in the world, the city is an exciting and inspiring base connecting creatives as well as investors and founders. Berlin continues to provide an established community of collaborators, customers, and investors on your doorstep. It offers competitive advantages when it comes to working and living conditions such as diversity, inclusiveness, and affordability. Also, office and appartment rents are significantly lower: A one-bedroom apartment is around 22% cheaper in Berlin,according to a Versus analysis.

Beijing’s quality of life falls behind its European competitor. Beijing’s soaring property market is pricing thousands of young workers out of the city and into commuter towns. Many live in the outskirts in more affordable ‘sleeper’ cities. Crowded subway stations and long commutes into the city are the norm according to CityMetric. The company work culture at startups in Beijing is called 9/9/6 - it means that regular work hours for most employees are from 9 am to 9 pm, six days a week. If you thought Silicon Valley has intense work hours, think again.

In case only your favorite Peking Duck remains on the con-side of your list, there are several restaurants serving the famous Chinese dish authentically in Berlin. If you’re left with more deciding factors, we have summarized some of the major points:

Feel free to browse around Reason-Why Berlin to learn more about Life in Berlin and our startup ecosystem.

Header image: © Get your Guide