A renaissance city for research

Berlin is a great place for tourists. Millions travel to the German capital every year to admire its monuments, visit its museums, theatres and concert halls, and to enjoy its many restaurants and music clubs. But while Berlin is famous for its culture and history, it is also the city where Albert Einstein, Max Planck, Lise Meitner and Robert Koch, among others, at one time worked. Although the city is justly proud of its scientific legacy, it is not resting on its reputation. Today, BrainCity Berlin and its scientific community are once again thriving. 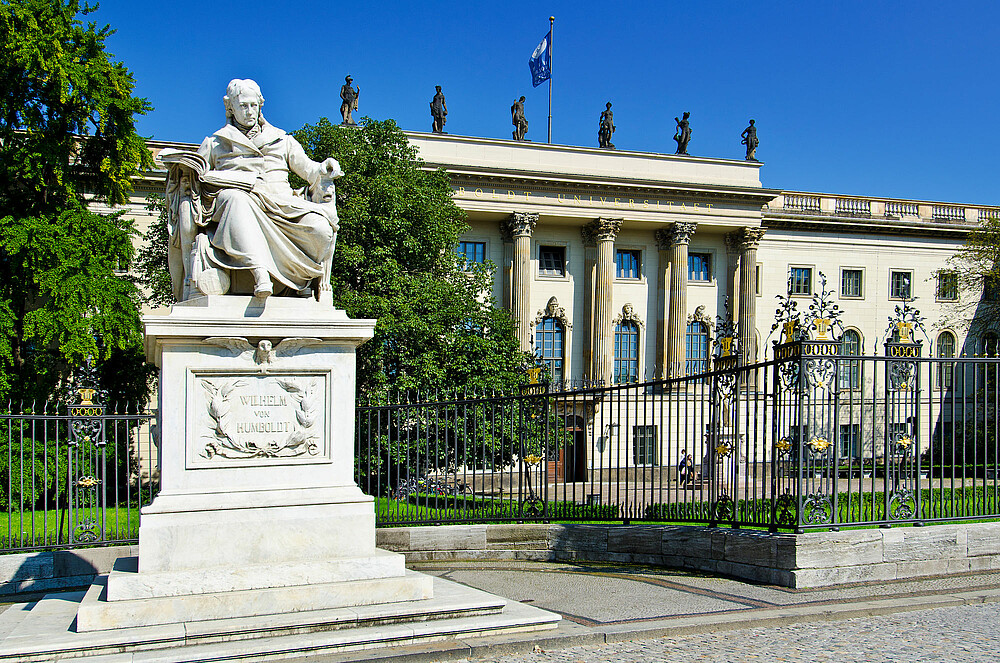 Berlin is home to three big universities, the Humboldt-Universität, the Technische Universität, and the Freie Universität — all among the best in the country — as well as the Charité-Universitätsmedizin, Europe's largest university hospital. In addition, Berlin is home to seven universities of applied sciences, four arts academies and 70 independent research institutes. The latter include several Max Planck and Leibnitz institutes, specialized in basic research, and the Helmholtz and Fraunhofer institutes, which focus on applied research — often in collaboration with industry. Berlin also maintains vast archives of cultural and archaeological artefacts. 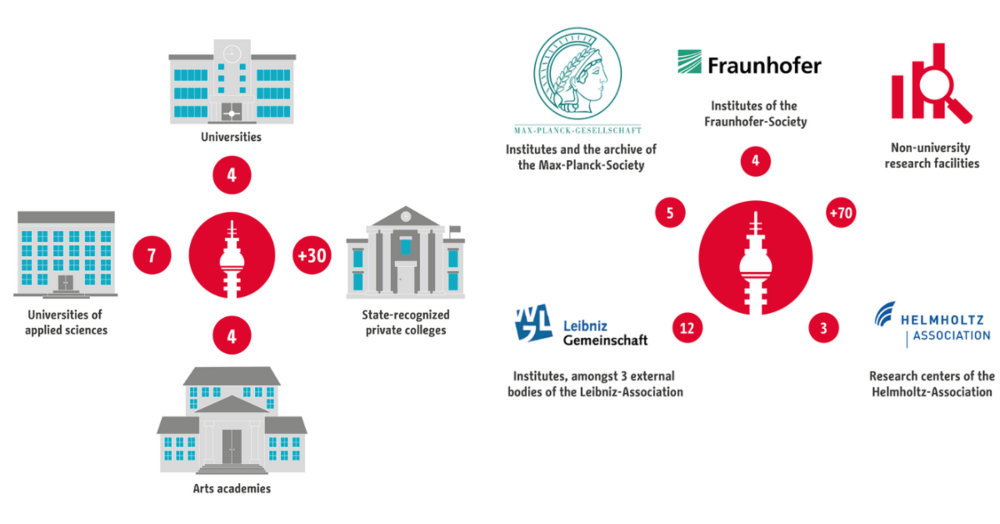 Research is not confined to the city centre. Nearby Potsdam, the capital of the state of Brandenburg, is a politically distinct entity, but is reachable by a short train ride and generally regarded as part of the ‘capital region’. Potsdam is also home to several big research institutes, including the Albert-Einstein-Institut, the Potsdam Institute for Climate Impact Research, and the German Research Centre for Geosciences. Berlin’s scientific credentials have been recognized by state and federal governments in the recent national Excellence Strategy competition. Berlin gained seven clusters of excellency across the humanities and sciences, which means it can rely on ample public research funding for years to come.

Science plays a big part in this fast changing city — helping to heal some of the wounds of the twentieth century. Global companies such as Siemens were founded in Berlin; one hundred years ago, the city was a hotbed of industrialization. The Second World War and the long division of the city by the infamous Berlin wall helped to end all that. But since the wall came down in the early 1990s, the reunified city has been gradually rebuilding and is expected to continue to develop fast.

Startups are a big part of that development. In the southeast of Berlin, the Adlershof technology park is the biggest of its kind in Germany. Many of the local startups have already grown into small- or mid-size companies. City officials are very supportive because startup companies both create jobs and attract new talent. 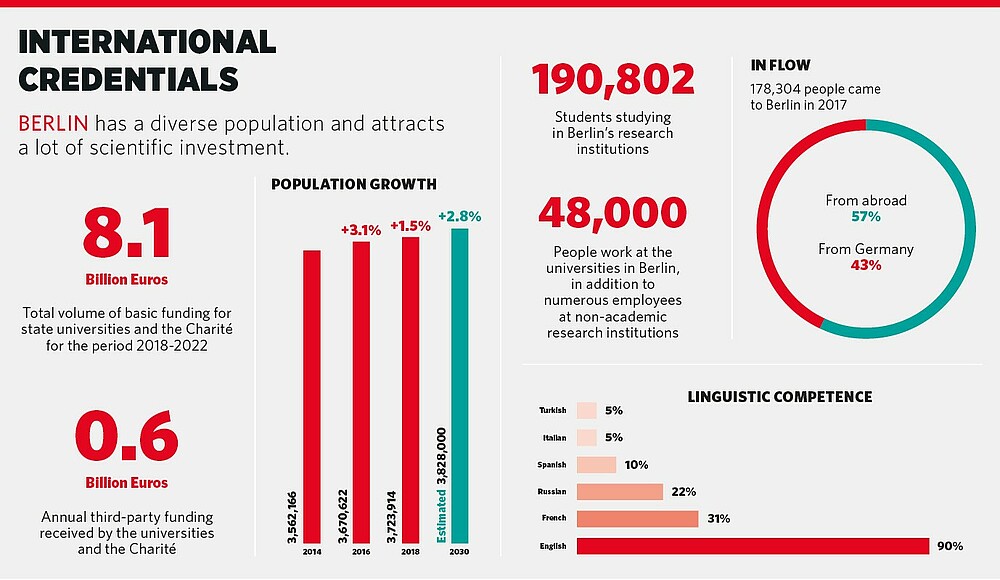 More than one million people with migrant backgrounds have decided to set up camp in Berlin and benefit from its diversity of expertise and open research atmosphere. This is not surprising, given that around a quarter of the 180,000 Berlin companies have an international character and most research institutions work in international teams.

In 2017 more than 36.000 students came from abroad, making up around 20 percent of all students in Berlin. Most foreign students came from China, Russia und the USA. There are many cooperative projects with partner universities from around the world and interdisciplinary networks supporting the international exchange in research and science.

"What I cherish about working in Berlin, is that everything is in a constant state of development, and you can take part in shaping the future."

Berlin is keen to keep attracting good researchers. “We have formed a new research alliance with all three major Berlin universities and the Charité,” says Günter M. Ziegler, president of Freie Universität Berlin. “Together with our partners, we have established a growing tenure track programme that allows foreign researchers to plan their future career.” The alliance is also cooperating with the University of Oxford, which already involves more than 300 scientists. 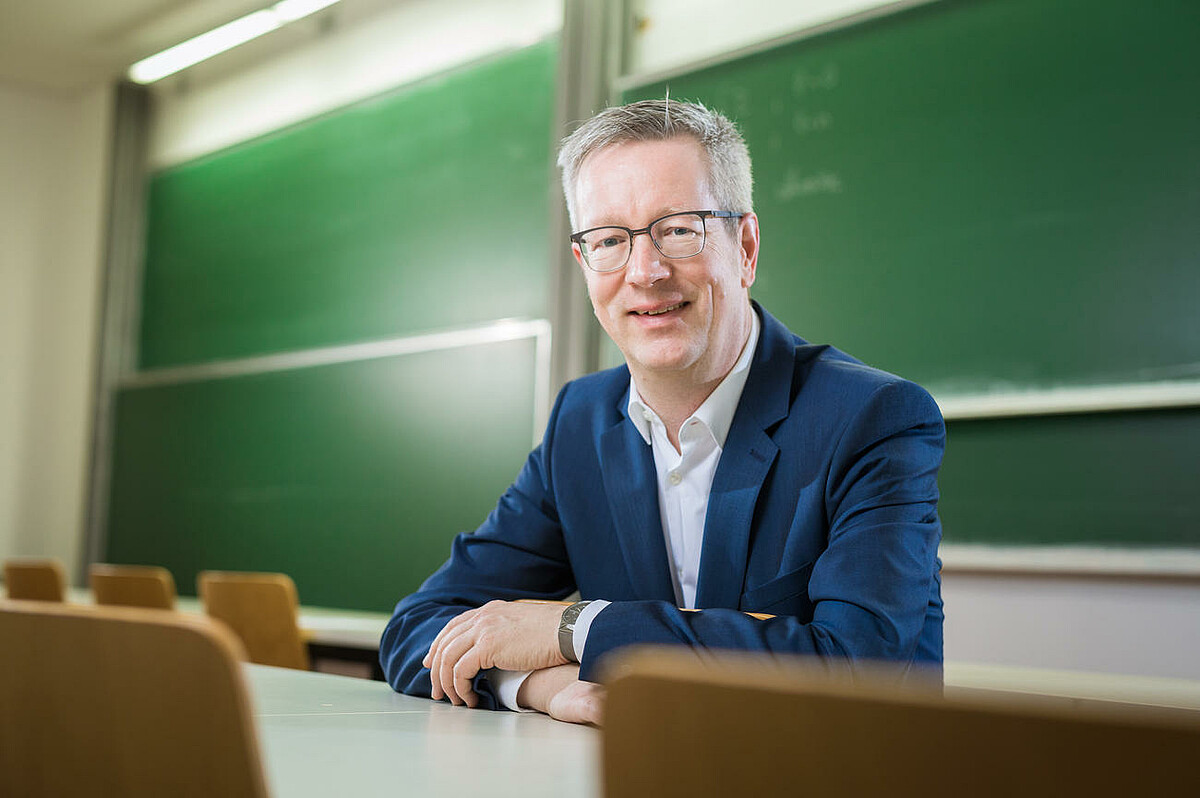 Ziegler himself is an incomer to Berlin. Originally from Munich, he spent many years abroad before settling into his new home. “Not only the city itself, but especially its scientific community has become very international. It is easy to become part of it,” he says. Mastery of the German language is not a prerequisite for someone wanting a scientific career in Berlin. In most institutes, just as in many shops or markets, a decent command of English is sufficient. In one of the mathematics research groups at Freie Universität, there are ten people from ten different nations. And there are dual career services available to help the partner of a researcher taking a job in Berlin to find a job for themselves.

“What I cherish about working in Berlin, is that everything is in a constant state of development, and you can take part in shaping the future,” says Ziegler. One distinctive feature is that science in Berlin is particularly collaborative, something he has rarely experienced elsewhere. In part this is due to the geographical proximity of many different research institutes: one might study new types of concrete close to someone developing cancer therapies; or learn ancient history not far from astrophysics; or research neuroscience, or solar cells or aquatic ecology. Berlin has a rich and diverse research landscape. And then, as it is also a political capital, Berlin hosts the embassies of other nations — providing bureaucratic help and cultural exchanges. And should a researcher be so inclined, there is also the possibility to take part in providing political and scientific advice, and grow the sphere of influence even further.

The science industry in Berlin doesn’t just educate talented scientists, but is also one of the largest employers. Over 30,000 people are active in research and development and work at universities, non-university research institutions and research companies.

Talent Berlin provides an overview of the Berlin employment market for scientists:

Click here to explore your possibilities in all industries!

Get to know the fascinating people behin Berlin's international scientific success! Read the stories of our BrainCity ambassadors.

Together with PLASMA ART & SCIENCE MAGAZINE we're publishing a series on outstanding research projects from Berlin. Have a look:

Watch our campaign movie and pick up on the enthusiasm:

This article was previously published in nature research.