Covering over 100 square kilometres and stretching south-west from the central districts Tempelhof and Schöneberg right to the border of Berlin to film-town Babelsberg and Potsdam, capital of Brandenburg, is the lovely borough of Steglitz-Zehlendorf. Of the twelve boroughs of Berlin, this one comprises the districts Steglitz, Dahlem, Zehlendorf, Lankwitz, Lichterfelde, and Wannsee. It also includes several attractive bodies of water, the Pohlesee, the Stölpchensee, Nikolassee, Schlachtensee, Krumme Lanke, the greater and lesser Wannsee lakes, and borders on the Griebnitzsee. The picturesque Pfaueninsel (peacock island) in the river Havel belongs to Steglitz-Zehlendorf as well.

The entire area is still considered very “west” in comparison to “east” boroughs such as Pankow. Various places in Steglitz-Zehlendorf retain some of the sleepy charm of when West Berlin was effectively an island (surrounded by the Wall that came down in 1989), and the borough is home to the Allied Museum. The district of Steglitz has the benefit of being central and is a popular residential area. Between Steglitz and Dahlem is Berlin’s beautiful Botanical Garden and Botanical Museum. Dahlem is famous for being home to the Freie Universität Berlin, one of the two state universities of world renown in Berlin. More on the FU below.

In the borough of Steglitz-Zehlendorf it is quite possible to forget you are in a metropolis. The southern half of the huge Grunewald forest reaches to the Wannsee, on the other side of which the Düppeler Forest is effectively a continuation of the woodland, with hiking trails good for birdwatching, for example. It leads right up to the Golf and Country Club Berlin-Wannsee, and further to a couple of Berlin’s moderate elevations, the Hirschberg and Moritzberg (they’re artificial and about 90 meters high).

Thousands of hectares of woods provide plenty of opportunity to get away from the hurly burly of Berlin city life. To the north-west, the Grunewald Forest edges onto the river Havel, so there are plenty of spots for bathing, many of which are frequented by a famous ice-cream and bratwurst boat, which of course also sells beer. For walks, seek out the 16th-century hunting lodge Jagdschloss Grunewald, or the little-known home of contemporary art Haus am Waldsee, a pretty house covered with ivy. Try ascending the Karlsberg 19th century lookout tower, the Drachenberg (Dragon Hill), or the Teufels Berg (Devil’s Hill), which at a 120 meters is Berlin’s highest elevation and houses the very 20th century abandoned US radar tower that was used during the Cold War to monitor what was going on in the GDR radio waves. There were rumours that filmmaker David Lynch wanted to turn it into some sort of theme park, but so far nothing seems to have come of that project.

Dog-owners enjoy a large area where canines may run free in the Grunewald, and also another one further out in Wannsee-Düppel.

Somewhere Beyond the Wannsee

Sailing is a popular sport in Berlin thanks to the Wannsee and the Havel river. The Havel Klassik is an annual regatta of classic yachts, and there are several sailing clubs and boat rentals on the Wannsee. To sail on these 20 bridgeless kilometers you’ll need a boating license and a map, because there are some deeps and shallows that require a degree of experience to manoeuvre, not to mention avoiding all the people doing water sports. Mind out for that bratwurst boat, too.

Alternatively, you can hire a yacht with a skipper to show you the ropes, or if you prefer to take it easy, just enjoy a drink and the sights and let the captain steer. Tours are available even in winter, some of which include mulled wine. 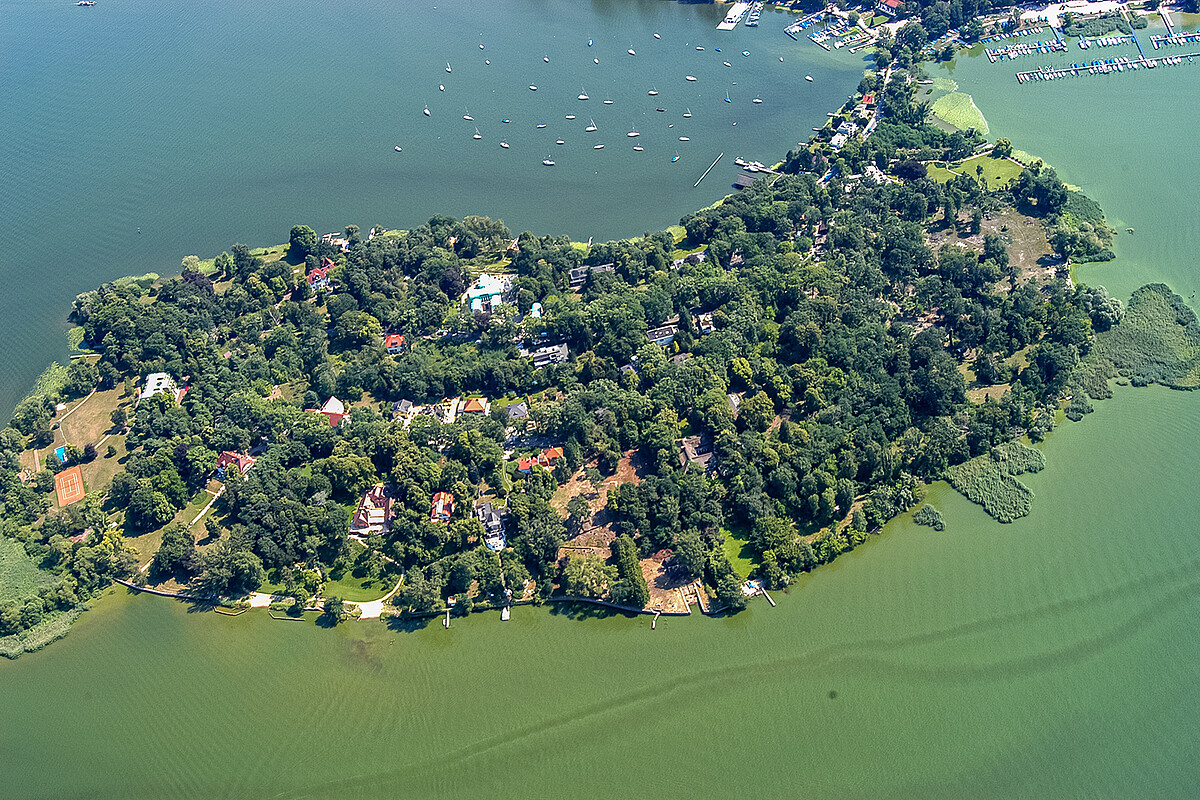 The island Schwanenwerder in the Nikolassee district of Berlin in the borough of Steglitz-Zehlendorf. – © Berlin Partner

Schwanenwerder is an Island almost entirely covered with villas and single-family homes; among them the estates of famous personalities such as Villa Tranquillitati, once built by media mogul Axel Springer in a 2.7-hectare park.

Did we Mention the Mansions?

Grunewald, Zehlendorf, and Lichterfelde West as residential areas are famous for their expansive and impressive villas. Strolling through such areas is a throwback in time in which you’ll find tree-lined cobbled streets with working gas light lanterns and quiet, picturesque little squares. If you can afford it, these are some of the most sought-after living areas of the capital. It is still possible to find spacious, modern, renovated flats in lovely hundred year old villas with gardens, to buy or rent, and even entire properties. Many of these historic patrician houses were built by well-known architects and some are quite flamboyant, in mock Tudor or Tuscan styles, sprouting merlons and turrets.

In 1911 the Kaiser Wilhelm Society for the Advancement of Science (Kaiser-Wilhelm-Gesellschaft, or KWG) moved into a beautiful palatial building in Dahlem. A little later the Kaiser Wilhelm Institute for Chemistry was where nuclear fission was first detected by Otto Hahn and Lise Meitner. In 1948 the KWG turned into the non-profit Max Planck Society, the home of many highly regarded scientific institutes, such as the MPIs for Physics or Biochemistry. It all started in the Dahlem Campus, an area also known as “Germany’s Oxford”. 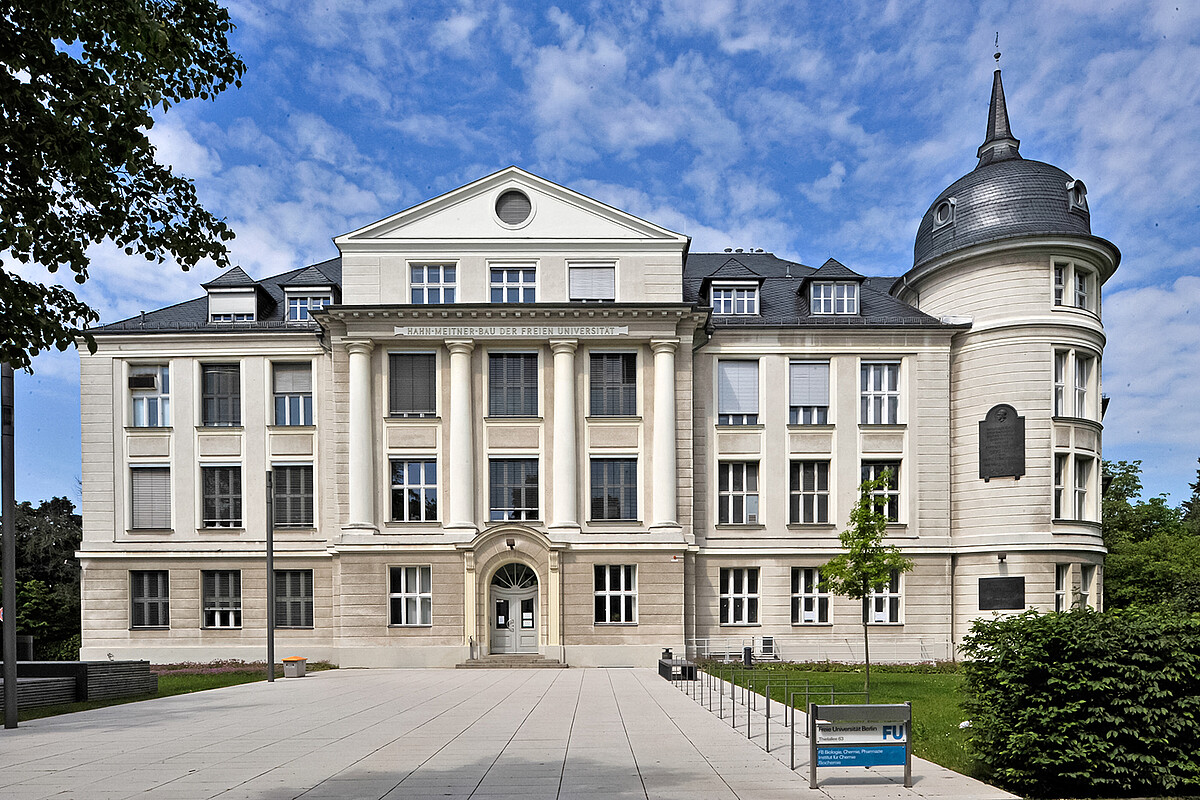 Nuclear fission was discovered in the former Kaiser Wilhelm Institute for Physics in the 1930s. – © Bernd Wannenmacher

Over the decades, these laboratories have produced a stunning amount of outstanding research and achievements by a great many Nobel Prize winners. Biochemist Adolf Butenandt, and chemists Fritz Haber and Clara Immerwahr worked here, as did Werner Heisenberg and even Albert Einstein. At the heart of the campus is the Harnack House, an international scientific club and now a conference venue for the Max Planck Society.

With such a tradition of braininess in Dahlem, it is no surprise that the Freie University of Berlin was founded in the vicinity, also in 1948. Frei means free, referring to West Berlin's status as part of the western ’free’ world, and in Berlin the uni is simply called the FU to distinguish it from the more central Humboldt University (HU).

Close to four Max Planck institutes, the FU is one of the eleven “universities of excellence” in Germany, this country’s Oxbridge or Ivy League. As a landmark in Steglitz-Zehlendorf, the famous Humanities building of the FU is worth a look. The architecture is adaptable and has many courtyards where students from all disciplines can meet and mingle. The cladding, however, began to rust not long after completion, and people started calling the building by the nickname Rostlaube, the ‘Rusty Bower’. When a shiny new university building was placed next to it, that was called the Silberlaube, or ‘Silver Bower’. The new Philological Library in the middle of the campus was designed by star architect Lord Norman Foster, who also had the idea for the dome on the Reichstag. Since it resembles the shape of a brain, the library has been called ‘The Berlin Brain’. 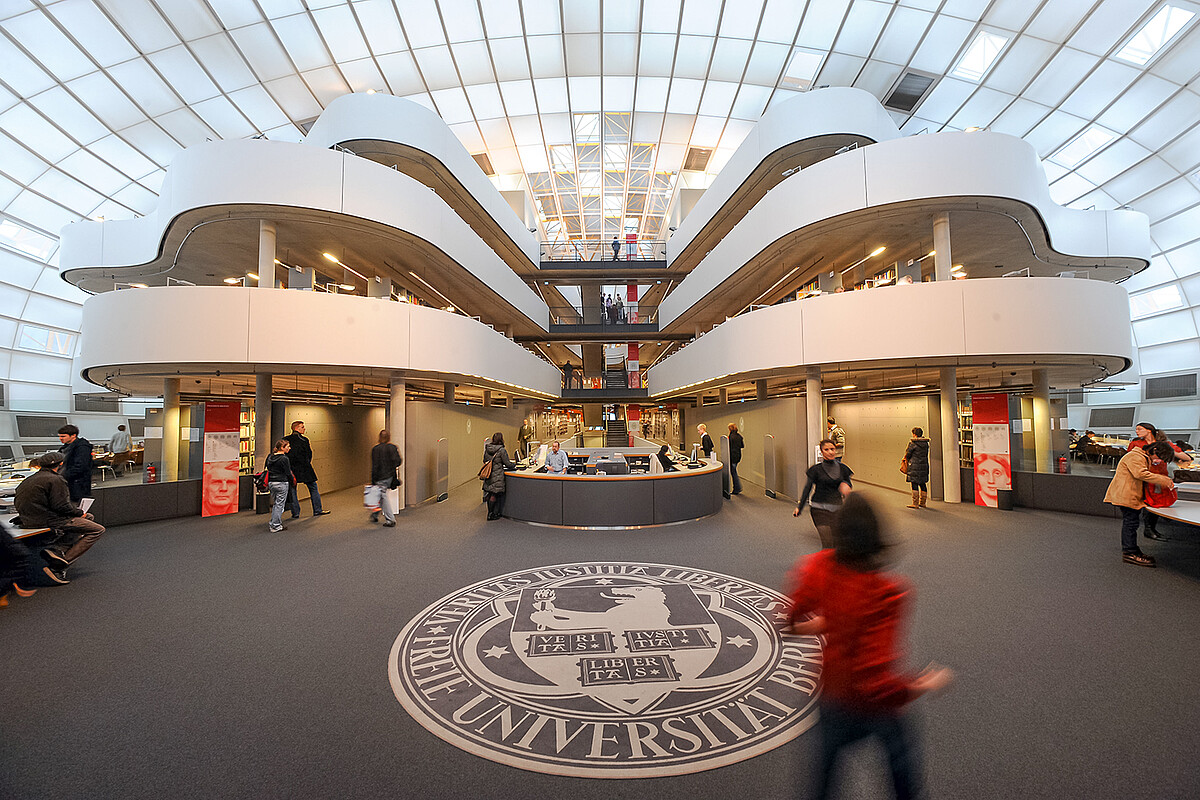 Many prestigious scientific institutions are based in Steglitz-Zehlendorf, such as the Charité University Medicine Campus Benjamin Franklin, Federal Institute for Materials Research and Testing, and the HZB Helmholtz Centre Berlin for Materials and Energy. That’s why startups in scientific fields like to settle in this borough, even if it isn’t the hippest part of town.