Many visitors to Berlin will remember the ‘Otto Lilienthal’ airport in the Tegel district, named after the German aviation pioneer who figured out the aerodynamics needed for wings to work. The hexagonal terminal building provided wonderfully easy access to the 14 gates, and taxis could get right inside the hexagon. The only problem was, it’s not easy to expand a hexagon, not to mention extend airstrips in a residential area.

Now West Berlin's former Tegel Airport is closed and the 200 hectare site is being converted into the Urban Tech Republic, or UTR. This is a research and industrial park for tech ideas and innovations which will bring together start-ups, academic research institutions and industry leaders. As many as 1,000 large and small businesses with 20,000 employees will work here in research, development, and production.

UTR is a modern town within a town. Where better to test new solutions for public transport and urban mobility? That’s why a new project focusing on human-machine interaction featuring self-driving electric buses is being implemented at UTR. Interaction between user and tech here refers to three areas:

Past Berlin mobility projects such as Shuttles&Co have paved the way for automated driving solutions within urban transport networks. Safe and reliable operation in ongoing traffic on public roads is not only possible, it has been well received by the public.

The new KIS’M project is not just about the technology, it’s also about implementation strategies for regular operation. As the official eMO project page puts it, “The goal is to demonstrate the transferability of close-to-the-market technology” and “development of a roll-out strategy for Berlin districts and large campuses as well as factory sites based on the knowledge gained.”

24,000 passengers used small yellow driverless electric shuttles to commute between the old town of Tegel and Tegel city station while the project Shuttles&Co ran until June 2022. The route includes crossing a main road which has a speed limit of 50 km/h. The automatic detection of this traffic situation represented a significant step forward compared to previous projects.

One of the major aims of the project Shuttles&Co was to determine how exactly highly automated electric mini-buses can be integrated into scheduled public transport operations as a sensible and economically viable addition to the service. The project partners are using the data gained in order to investigate how automated and connected vehicles can better recognize their surroundings, how the high-speed exchange of the data required for this can be improved, and how digital maps can be created and constantly updated.

The partners involved in the project represent a veritable who’s who of the digital mobility scene in Germany:

After the success of previous projects, these partners have now embarked on a new mission, which is planned to run until the middle of 2024.

Interconnected mobility means that vehicles and alternative means of transport are connected to each other as well as to their surroundings via the internet. Connectivity and automated communication between road users is an important prerequisite for autonomous driving. Development of better interaction between automated vehicles and with traffic control aims to achieve greater traffic safety in a mixed system in which not all vehicles are online, not least pedestrians and bicycles.

While the previous projects examined the integration of modern autonomous vehicles into scheduled public transport routes, the new project KIS’M is to test in practice the introduction of autonomous on-demand services in public transport in large cities. The shuttles run when requested, without vehicle attendants on board, and stop as near as possible to where the passengers want along the route instead of at predetermined stops.

The trials will involve several test vehicles for automated driving in public spaces, incorporating emergency vehicles and public transport. In addition, cyclists and pedestrians are to be better integrated into traffic control.

This new type of mobility service on the UTR site and the immediately adjacent areas is monitored by several research projects looking into a multitude of details, for example, the automated formation of an emergency lane or so-called vehicle-to-infrastructure applications (V2I) at traffic signals. The work done by KIS’M will also serve as the basis for a heat map of virtual loading zones for CEP services (courier, express, parcel).

Artificial intelligence tools are being tested in order to derive more up-to-date and accurate maps and traffic information from the data recorded. This includes 'self-updating' for static and dynamic objects and events with data sources from various detection systems. V2X is a software technology that puts vehicles and objects in their environment, such as traffic lights, into one network. The data for the self-updating maps are provided by sensor technology such as Lidar, which stands for Light Detection and Ranging and is a method for determining variable distances by targeting an object or a surface with a pulsed laser and measuring the time for the reflected light to return to the receiver.

All KIS’M data and results will be made available as open data so all road users can benefit from the research. 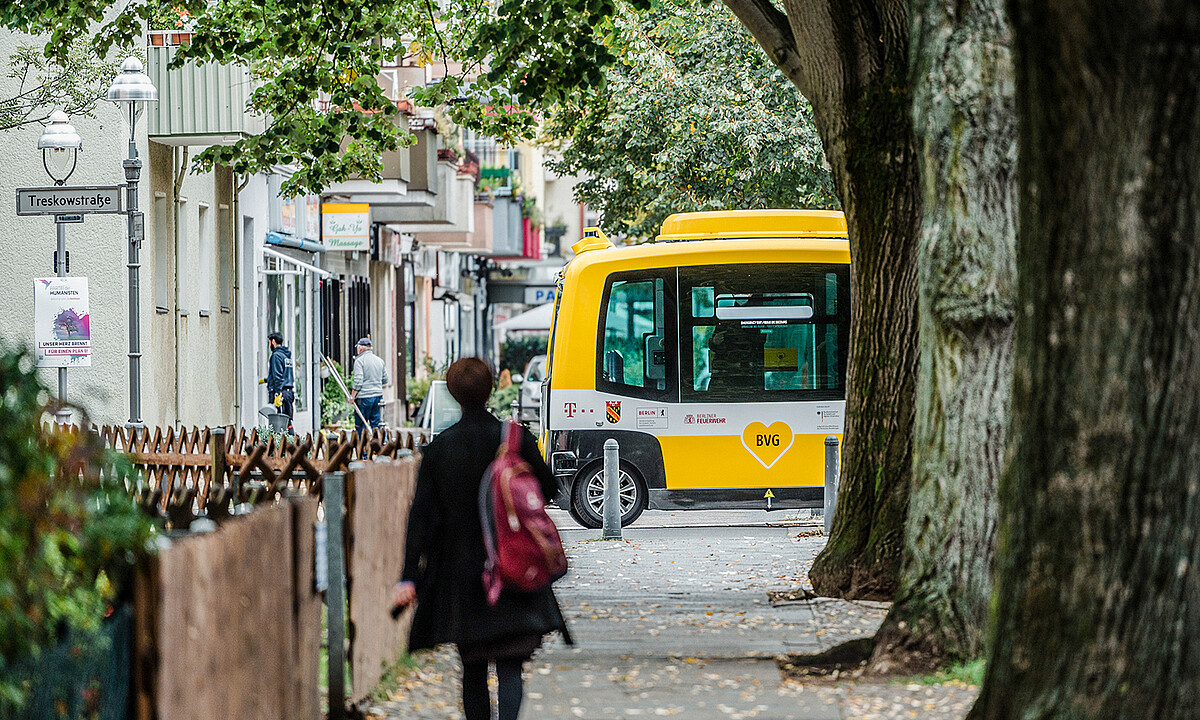 KIS’M is not only about the technology. The project clearly involves human-machine interaction concepts, and the aim is user-centered integrated technology development, where users comprise passengers, traffic participants, and staff. The interaction between passengers on board the vehicles and the technical control personnel, operations supervisors, or security personnel will be investigated. The training of the technical supervisors and integration of the humans into all the operational processes will be closely studied.

Public acceptance of the automation of public transport and concerns about the safety of autonomous vehicles and the digitalization of transport in general play an important role in the KIS’M project. It's all about developing a socially approved vision of tomorrow's mobility.

KIS’M is an important step in meeting the challenge of providing affordable and reliable public transportation in urban environments and fast-growing residential areas. As we have seen, the project will analyze various areas of application, aiming at the scalability of automated mobility solutions and the development of a rollout strategy for Berlin and beyond.