Recent studies show that young people are especially attracted to the city.

In its report Decoding Global Talent 2018, the Boston Consulting Group found a decline in the desire to work abroad. Of the 50 most populous countries in the survey, only 7 show a significantly greater interest in mobility now versus 2014. Reasons for this somewhat surprising fact include tightening immigration policies, but also improvements in the economic situation in many Asian and Eastern European countries. The number of respondents showing willingness to emigrate to another country dropped from 64% in 2014 to 57% today. Given the fact that demographic changes in many Western countries are increasing the demand for skilled labor, the competition for talent is fierce.

According to BCG, Germany has presented itself as highly welcoming to people from other countries. This, combined with a booming economy, goes a long way toward explaining the country’s rise among workers’ top choice for foreign countries to work in from 4th place in 2014 to 2nd after the United States.

Although Germany has moved up to 2nd place overall, among German cities, only Berlin has made it into the top 10 of the most attractive cities for the global workforce whereas Munich ranked 23rd and Hamburg 32nd. One of the main reasons is certainly the highly international character of the city, which makes it possible to get along very well there without having to speak German. The Frenchman Quentin Chaleard, who moved to Berlin to work for Delivery Hero, is quoted in the BCG article on Germany. He sees Berlin as more international, more affordable, and more laid back than Paris, which was the number-three city destination in 2014 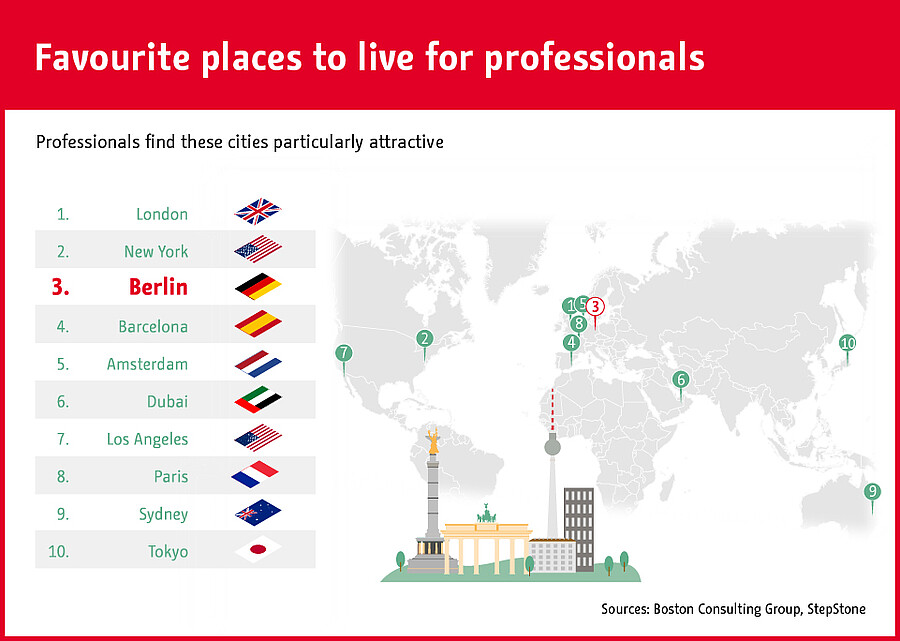 BCG advises companies take a closer look at where people want to work, what they want in a job, and where to find talent possessing the skills they need. BCG recommends companies include a rigorous forecast of their workforce and skill needs and more creativity in sourcing, which can also mean relocating business units to places that are particularly attractive. It also suggests acquiring smaller companies with the talent, especially in digital fields.

If you take a look at the number of pluses offered by Berlin, it quickly becomes clear why the German capital is so attractive to younger professionals, the so-called millennials. Nestpick, a company that operates the world’s largest database for furnished apartment rentals, created the Millennial City Ranking to pinpoint those cities which are successfully attracting the core workforce for the upcoming decade  and highlight up-and-coming locations.

Find tips, infos & job offers for your reboot in Berlin on talent-berlin.de