Berlin is a green city by all accounts, and not just because it has so many parks (more than three times as many as Munich or five times as many as Paris, according to some sources). Whether you’re partying, founding a company, or just having an ice cream – you can do it green in Berlin. Don’t believe us? We’ve written about all these things:

It’s not for nothing that Berlin is one of the regular hosts of the international Greentech Festival. This Festival, first held in 2008, creates an inspiring space for people, ideas, green innovations, sustainable companies, and organizations that want to change the world for the better.

Anyone who was in Berlin in May 2022 was able to get an idea of what a green and sustainable world could look like at this year’s Greentech Festival at the former Tegel Airport. Those who were not there can still become part of the movement. On its GTF World Tour the Greentech Festival will be visiting New York in September 2022, London in October, and Singapore in November.

There’s green festival flair in Berlin this September too. More on the SET festival below. 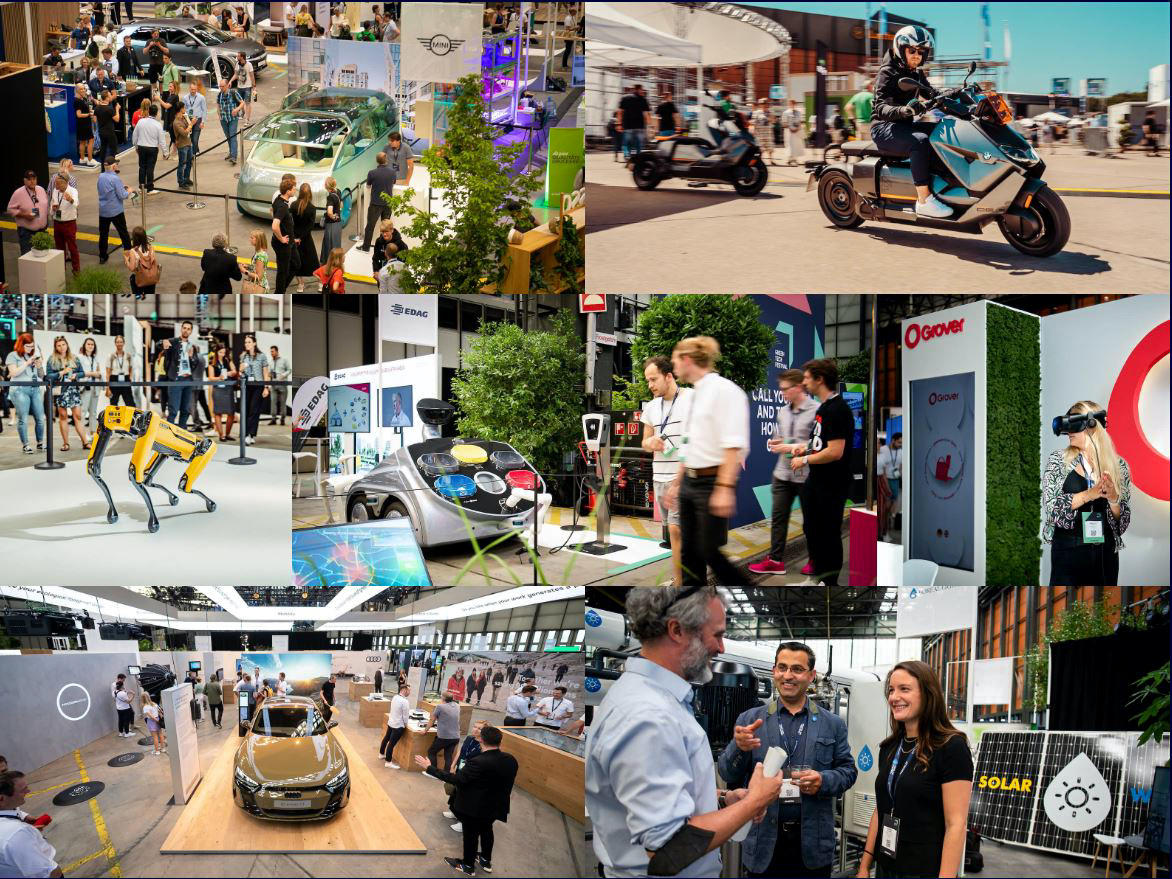 The GREENTECH FESTIVAL brings together people, ideas, innovations, companies and organizations that change the world for the better. – © Greentech Festival

Why Greentech is Important to Berlin

The city and the Berlin senate have demonstrated active political will and commitment to making Berlin greener by adhering to a 17 goal sustainable development agenda – for the sake of the city, its inhabitants, and the business environment.

Knowledge is sustainable power. There are many scientific organizations such as research facilities, universities, and institutions of higher education in Berlin that are busy advancing the state of green technologies. For instance, the Technische Universität Berlin is working on photovoltaics, wind energy, grids, storage, and hydrogen, among other topics. Non-university research institutes include:

Even more startups and companies are involved in greentech business models. View energy technology and clean technologies in the capital region in this interactive industry map.

The city of Berlin is surrounded by the state of Brandenburg, which is one of the world’s leading regions in the expansion and integration of renewable energy. Clean energy technology alone counts approximately 6,500 companies with over 60,000 employees in Berlin Brandenburg, making close on €30B annual turnover. Clean technologies include:

Resource management shows that it is not just the tech that must change. To achieve true sustainability, the entire economic system may need an overhaul. Along with Berlin’s commitment to clean green technology comes the investigation and promotion of circular economy principles.

Given Berlin’s long-term commitment, small wonder that the city is one of the most sustainable in the world. A recent study compared 100 cities from 47 countries and put Berlin in the top five of its green ranking.

The ‘Sustainable Cities Index 2022’ by the global construction design, engineering and management consultancy Arcadis considers indicators such as greenhouse gas emissions, sustainable transport incentives and bicycle infrastructure, waste management, environmental pollution, and public policy, in which categories Berlin did particularly well. Arcadis notes the city’s comparatively low environmental impact and (there they are again) the numerous green spaces. In terms of sustainability worldwide, only the Scandinavian cities rank higher than Berlin.

Berlin did well in other categories also, such as transportation infrastructure, education, access to reliable electricity, economic development, quality of life, and the social aspects of a city such as the state of the health and education systems or public transport. According to the report, Berlin is in the worldwide top 5 not only for sustainability but overall too, over all the 26 indicators Arcadis considers.

All Set for the SET Awards

The SET Awards for start-ups developing clean energy solutions are organized by the German energy agency (dena) Startup Energy Transition and are presented at the annual SET Festival in Berlin. SET selects the 100 most innovative energy and mobility startups in the world for their SET100 list. The next international competition for young companies worldwide innovating for the global energy transition takes place September 2022.

Of the 100 companies in the shortlist, nine are from Berlin:

Of the 15 finalists worldwide, three are from Germany, all of them Berliners:

We wish our finalists the best of luck for the SET Tech Festival 2022 on 20 September in Berlin!

So green is nothing new for Berlin. Green mobility, sustainable food production, renewables, zero waste, and much more – Berlin is proud of its green consciousness.

Oh, and here’s a picture of one of those parks: the Mauerpark. “Mauer” means “wall” and the park covers a small part of the area where once, until 1989, the Berlin Wall separated the two parts of the city. 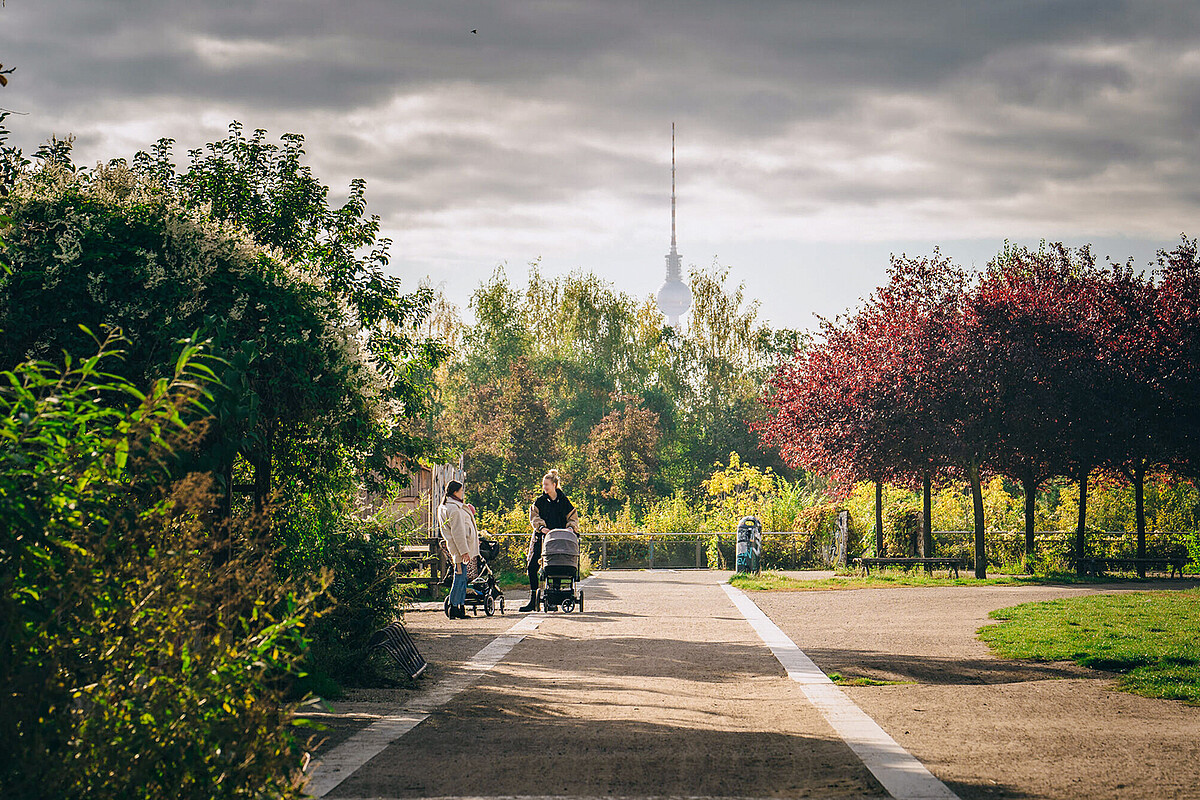 Mauerpark, a peaceful reminder of Berlin’s past – © Berlin Partner – eventfotografen

Read more about sustainability in Berlin: